The Enormous Benefits of Collaboration 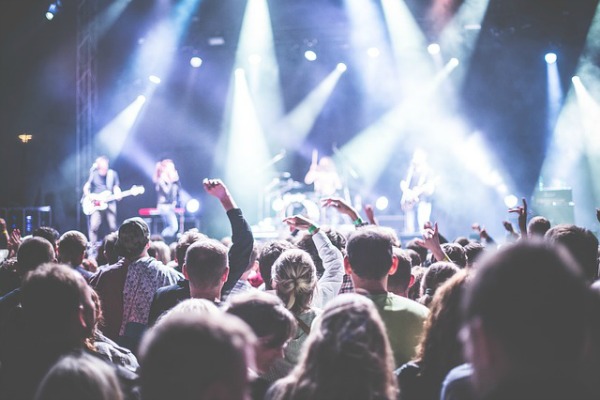 Hey everyone!  I’m sharing a personal story with you today, to illustrate how much you can accomplish when you collaborate with others to reach a shared goal. My hope is that it inspires you in some way.  Enjoy!

July 2016.  The sun, almost directly overhead, was beating down hard.  I could feel the sweat on my forehead, and I had yet to hit the stage. My dark jeans and black button-down shirt didn’t help. I stood backstage with the others, in the “green room”, if you could call it that.  It was a small white tent, positioned stage right.  Security personnel and event staff milled around,  occupied with the task at hand.  Thankfully water bottles were in good supply.  They provided some relief.

After waiting in the wings for about 30 minutes, the cue was given, and my four bandmates and I sprang up the stairs onto the stage.  We took our positions as I surveyed the landscape.  The sun was no longer an issue, as the festival’s main stage was covered by a large canopy, stretched across a metal frame.  In fact, there was a slight breeze that I hadn’t noticed before.

I looked up.  Rows of lights were mounted directly overhead, and two line arrays of main speakers hung from large trusses at the front of the stage, to the left and right.

I turned around to check on the band.  My drummer was a few feet up, positioned on a large riser.  The others were checking their guitars.  I looked over at my wife.  She smiled as we exchanged a knowing glance.  I returned the favour.

THE SOUND WAS OURS

Someone yelled out, “you guys good to go?”  I turned to my left to see two monitor engineers.  They were positioned in the back of a semi-truck trailer, which was connected to the stage.  In front of them were large mixing consoles and rack mounts filled with amplifiers and processors.

I gave them the nod, and stepped to my keyboard.  I played the opening chords of our first song, and projected a melody into the microphone.

The volume was immediate.  The synth pad rose, warm as the afternoon sun, and the electric guitar began to ring out as we made our way to the chorus.  I could feel the bass in my chest, punctuated by the slam of the kick drum. It felt like a punch to the gut.  A really pleasant one.  The sound was ours, and it filled a city block.

Summer music festivals. Thousands of people, big lights, big sound. We had played a similar venue only a week previous. But somehow, it was this moment.

The moment I fully understood the power of collaboration.

Music has always been a big part of my life.  In high school, I taught myself to play the piano and guitar, and to sing.  In the twenty years or so since, I’ve performed hundreds of times, in many different venues.  When I was younger, I even toured across Canada and the U.S. on a couple of occasions.  But it’s always been someone else’s songs.

Despite my experience playing music, I always hesitate to refer to myself as a musician.  Instead, I usually use the term songwriter.  The reason for this is twofold.  Frankly, I’m not that great on the piano, or the guitar for that matter.  I do enough to get by, and can manage the style of music I play.  The same goes for my singing voice.

My talent, as well as my passion, lies in songwriting.  I get more fulfillment from writing and recording songs than performing them live.

For many years, the songs I wrote remained in the place they were written.  In my recording studio, stored on my computer’s hard drive.  With the exception of a handful of songs which were published, most never saw the light of day.

The dream of any artist, be it a songwriter, a novelist, or a painter,  is to have their work seen and heard by others.  They want their art to make a difference, to impact someone in a meaningful way.  I was no different.  My problem was figuring out how to get my songs from my basement studio, to a larger audience.

I felt very limited.  I had confidence in my songs, but little else.

One of my closest friends is a talented drummer who I’ve played music with for many years.  He suggested that we start a band, together with my wife and another friend who played guitar, and who I’d co-written a number of songs with.  I loved the idea, but for some reason I was hesitant.

I began to realize that I had a problem with control.  I was afraid that by inviting others into the creative process, I was relinquishing some ownership over the songs I was writing.  Your songs can become like your kids, in a way.

At the same time, I knew that my friends possessed talent in areas I didn’t, and that we could all go farther by working together.  But in order to make it happen, I needed to let go of control.

It was official.  We formed a band.  The next step was to record an album.

Immediately, I could feel momentum begin to build.  My bandmates incredible musicianship brought the songs to another level.  But we needed more help if we were to realize our vision.

The events below actually took place over a year and a half.  In an effort to be concise, I’ve listed them in bullet form, to document what we accomplished by collaborating with talented people.  I’ll admit, there were moments when it took more than collaboration.  Several times, I pushed through fear and insecurity, just to approach some of the people we eventually partnered with:

In addition to the musicians and engineers who helped bring our project to life, we partnered with a designer to develop artwork for the album cover, and a friend who volunteered to become our live audio engineer.  Last, but certainly not least, we welcomed a full-time bass player into the band.

Over the next two years, we played a number of live shows, received a radio feature, and had our music streamed worldwide on iTunes, Spotify etc.  One of our songs made it to the semi-finals of the world’s largest songwriting competition.

All of this was made possible because I took a collaborative approach.  If I hadn’t,  my songs would never have made it out of my basement studio.  Instead, I decided to deal with my control issues, and allow other, more talented people to become part of the process.

Most importantly, my songs became OUR songs, and my bandmates and I now share an experience that stay with us forever.

The possibilities are endless.

If the idea of collaboration resonates with you, here are some things to consider, from my own experience:

Self awareness is an important trait.  To acknowledge your strengths, but also, to know your limitations.  If you’re unsure what they are, there are a few ways to figure this out.  Doing so will help you identify areas where you can benefit by including other people.

Start by seeking honest feedback from someone you trust.  Ask them what they see as your greatest strengths, and your biggest gaps.  If they tell you something that surprises you, or even upsets you, don’t be too quick to deny or dismiss it.  Use their feedback as a point of self reflection.  We all have blind spots in our life, as well as hidden strengths.

Don’t try to be expert at everything.

So you’ve figured out what you suck at. : )  Often our response is to try to shore up our weaknesses, do whatever it takes to convert them to strengths.  This approach will result in you becoming a jack of all trades, master of none.  Instead, focus on attaining expert knowledge in the areas where you are already naturally strong.  Outsource skills you don’t possess to others who can get the job done, at a high level.

Don’t be afraid to ask.

If you’ve found someone you think you’d like to collaborate with, ask them.  Don’t assume that they’re not interested.  They may have the same idea you do.  What’s the worst thing that can happen?  They politely decline your offer.  The upside is worth the risk.

Let go the desire to control.

When you collaborate, you’re giving someone else an opportunity to be involved, to showcase their skills.  Even if the project belongs to you, give them the freedom to provide creative input.  They might just make the end product that much better!

What areas can you collaborate more?

Is there anyone you know who could use your help?

Whether you are trying to start a business, complete a work project, or pursue a passion, look for ways to unleash your collaborative power!

I’m converting side hustles into a full time, location independent business.  I plan to walk away from my 9-5 career in August 2019.

Are Extended Warranties Worth It?

10 thoughts on “The Enormous Benefits of Collaboration”